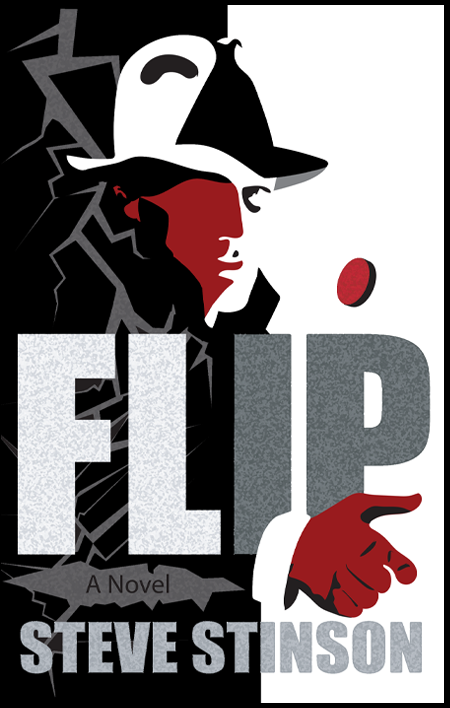 
On the night Matt Andrews decides to abandon his pregnant girlfriend, a mysterious hitchhiker on a lonely crossroads witnesses his choice of direction.  Matt flips a coin and picks East, and a successful career and family blossom.

Sixteen years later, however, Matt is approached by the hitchhiker again, who flips a coin and shows Matt what his life could have been had he stayed to raise his child.

As one coin flip follows another, Matt is transported back and forth between two lives and two families.

Now, he must uncover the identity of the hitchhiker, why he is in perpetual limbo, and how his own artwork may hold the key to undoing his life’s biggest regret.

Everything he thinks he knows about himself is called into question. With the help of a country preacher and an eccentric library assistant, the search for answers begins . . .  on both sides of the coin. 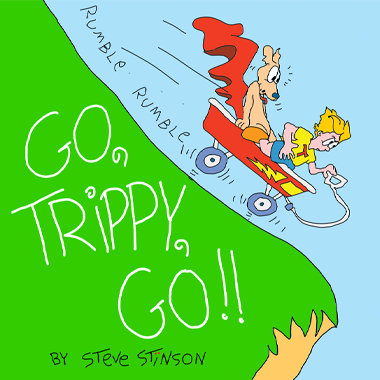 Go, Trippy, Go!
When his cousins take off running, Trippy sets out to catch them. Bedlam ensues as our hero overcomes one hair-raising obstacle after another. A story told in only 21 words across 56 pages, this one's for the very wee crowd. It can also be an I Can Read It book for an older one. It also appeals to anyone who likes Buster Keaton chase scenes. It puts the slap in slapstick. 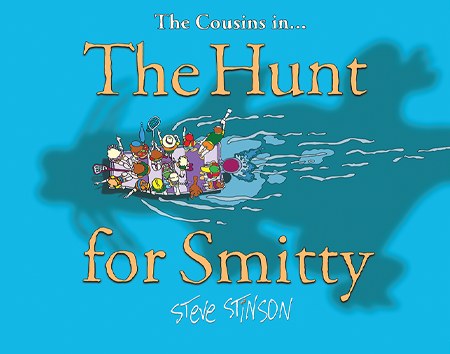 The Hunt for Smitty

When 15 cousins set off in a boat in search of the Smith Mountain Lake monster, they have the adventure of a lifetime. And they make a friend for a lifetime. But first, they have to save a bridge from collapsing. This one has a broader audience. It's a longish read aloud for a 5 year old and an easy read myself for an 8- 10-year old 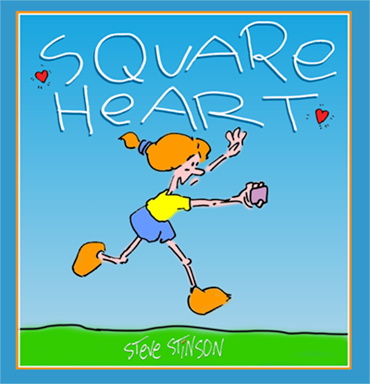 Square Heart is a story told entirely in pictures, sort of a silent movie in print. It's a gift book. It is for anyone who has tried on more than one heart, only to keep looking. I think of it as a long-form Valentine.

It's the story of a young woman who finds herself in search of a matching heart. Her journey takes her through a series of locales, all welcoming but none fruitful.

Lonely and weary, she abandons the search, only to look up and see that a matching heart has found her. 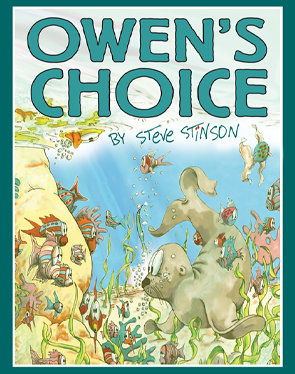 This one has, as they love to say, a 'message for our time.'

Our hero, Owen the Seal, is a zoo seal who finds himself stranded at the ocean shore, where he must survive for 30 days. With the help of a little bird who befriends him, Owen discovers he has the wits and strength to thrive on his own – and confront his greatest fear.

When the 30 days are up, Owen must decide between a life of security and dependency and one of uncertainty and self reliance. This one's for the 6-10 year old crowd. 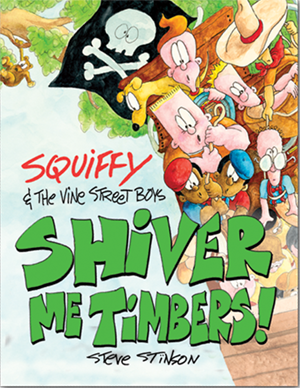 Squiffy & the Vine Street Boys in Shiver Me Timbers!

Squiffy's the idea man in the neighborhood, and he can always count on his pals, the Vine Street Boys, to join in. From their treehouse headquarters at the corner of Fifth Street and Vine, the boys plot their adventures. In book one, they court disaster in "Shiver Me Timbers," a story of a pirate ship built on the crown of a tree. When one too many pirates join the crew, things list way too far . . .  and back. For the 5-8 year crowd. 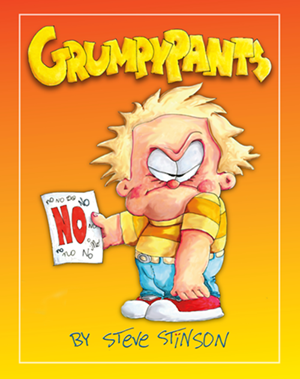 When all the guys find out that their pal, Grumpypants, has a bed with two wrong sides, they set out to fix the problem.

With ingenuity and teamwork, plus some skill with hammer and nails, the boys create a path to happiness for Grumpypants. The question is – will he take it?

A read aloud book for the 3-6 year old crowd. 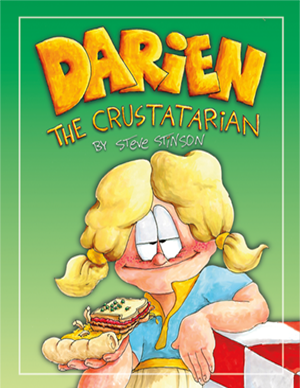 Darien awakens to find her taste buds have gone away and that no food -- including candy and milkshakes -- tastes good.

Luckily, her father discovers the one food that makes all others edible.

She's an over the top drama queen and the book is illustrated from a child's eye view, putting readers in the role of a private audience, like a kid brother. This is a fast, fun read for ages 3-6. 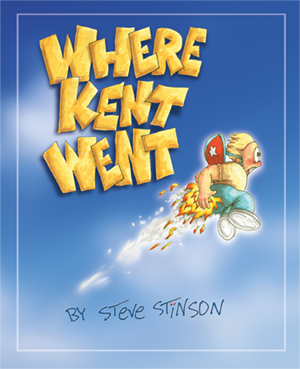 "Kent stuffed fireworks in his pants." So begins a rowdy, slapstick journey around the world for the hapless Kent.

Watch him as he gathers surprising  souvenirs that get stuck in his pants along the way. He encounters Don Quixote,  Rudolph the Red Nosed Reindeer, and Romeo and Juliet, among others, before he is rescued from his landing place atop the Eiffel Tower. 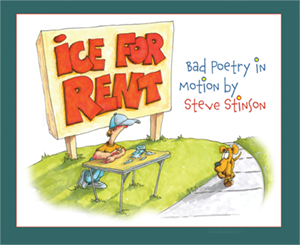 Meet Lonely Fred, Fretful Jack, Runnin' Ray, and all Eleven Masons along with many other characters on the pages of "Ice for Rent."

Some of these poems are stories in miniature. Others are pure wordplay. All of them bring a smile.

Light verse and illustrations  for the 6-10 year old crowd from Steve Stinson. 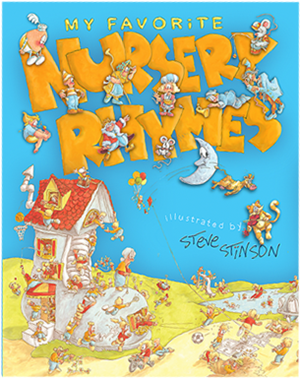 These are the fun ones...the timeless rhymes that beg to be read aloud and remembered forever.

Nursery rhymes are character sketches. They should be illustrated that way, and that's what I've tried to do with this book.

There are allowances for words that are bygone – "Snips and snails" becomes "Frogs and snails" – but mostly the rhymes are retold in their true form. 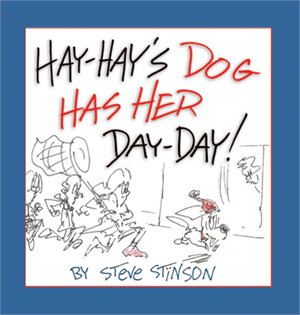 Hay-Hay's Dog Has Her Day Day

When Hay-Hay meets an Elf who turns her into a dog, she decides to make a day of it by visiting her school. Bedlam ensues.

I wanted to capture the energy and spirit of a first sketch in the published illustrations so "Hay-Hay" was drawn in ink direct to the page. No layout. No rough draft. No sketches. No makeovers.

It was an experiment. I hope you think it worked. 3-6 years. 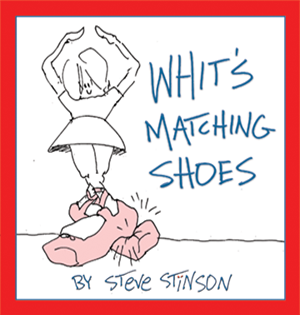 Be careful what you wish for.

When Whit wishes her feet would fit her new dancing shoes, she gets a pair of too-big feet.

Like Hay Hay's Dog Has Her Day-Day, this book was made "Alla Prima," which is art lingo for "in one sitting." I wanted to capture the energy and spirit of a first sketch in the final illustration, so "Whit" was drawn in ink direct to the page.

Every ballet 'position' is drawn, just in a curious way. 4-7 years. 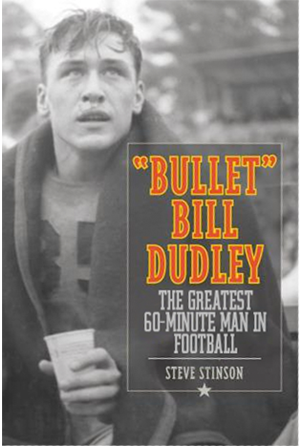 An NFL team today suits up eight men to play the positions that Bill Dudley played by himself in every game.

The most versatile player in NFL history, he never left the field on his way to a college and NFL Hall of Fame career.

You can't separate football from the man, but you can separate the man from football.

This book captures Bill's steadfast sense of purpose and his devotion to his family and community. 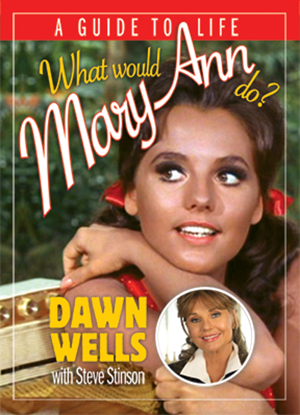 What Would Mary Ann Do?

As the sweet, polite, and thoughtful Mary Ann Summers from Kansas in the hit series Gilligan’s Island, Dawn Wells created an unforgettable and beloved character that still connects with people fifty years from the shows debut in 1964.

As the “good girl” among the group of castaways on a tiny island, she was often positioned against the glamorous and exotic Ginger Grant, played by Tina Louise, prompting many to ask: Are you a Ginger or a Mary Ann?

This book not only helps readers answer that question for themselves but also sends the inspirational and heartwarming message that yes, good girls do finish first. Part self-help, part memoir, and part humor–with a little classic TV nostalgia for good measure.